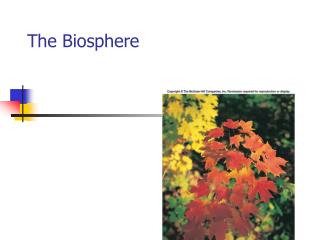 Ecology - . what is ecology?. ecology is the study of interactions between organisms and the living and non-living

AP Ecology Unit - . chapters 52- 56. chapter 52. an introduction to ecology and the biosphere. overview: the scope of

Microbial Evolution and Systematics - Chapter 14. microbial evolution and systematics. i. early earth and the origin and

Darwin and the Evolution of Reasons - . daniel dennett biosphere february 14, 2009. philosophers who weren’t. #1

Organization of Life - . biosphere. ecosystems. communities. populations. organisms. what is an ecosystem?. an ecosystem

Ch 5 What do we know about ecosystems? - . an ecosystem consists of all the organisms ( biotic ) in a community and the

The Ecosystem: Interrelationships between organisms and the environment - Definition of terms ?1. ecology: a study of the

Ecology - . ecology. ecology is the study of the relationships between living things and their interactions with the

Anthropogenic Mass Extinction - . homo sapiens and the evolution of the biosphere since the pleistocene. kyle burchett

On the Co-Evolution of the Geosphere and Biosphere - . arizona state university february 6, 2013 robert m. hazen,

Chapter 1-The Science of Life The Biosphere - . 8 km above sea level and 11 km below sea level. what is biology?. the

The Carbon Cycle - . the carbon cycle describes the exchange of carbon atoms between various reservoirs within the earth

Chapter 22 - . ecosystems &amp; the biosphere. energy in an ecosystem-. begins with the sun to trophic levels: 1.

An Introduction to Ecology and the Biosphere - . the scope of ecology . the scientific study of interactions between