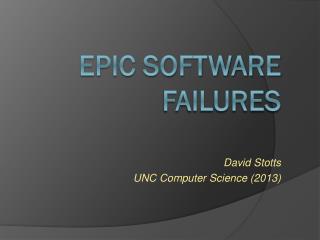 Infamous Software Failures - . cs a470. (don’t let these happen to you!). what is good software?. depends on your point

Epic and Epic Hero - . the odyssey. warm up. what qualities make someone a hero? can you think of any modern-day heroes?.

EPIC - . the story we find ourselves in!. things were once good. something awful happened. a great battle must be fought.

EPiC - . working together to a healthy future. today. welcome and introductions what is our purpose? what are our

“EPIC!” - . epic, what does it mean to you?. hero w/ battles and journeys ceremony, giving of gifts boasting dialogue

Epic - . quick quiz 1 for strongly agree to 4 strongly disagree. society needs heroes. it is important to understand the

Epic - . genesis to joshua. epic. “ a long narrative poem on a great and serious subject, related in an elevated style,