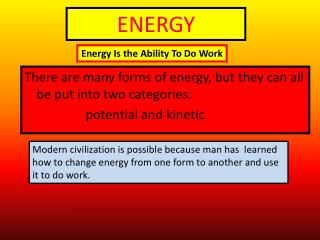 ENERGY. Energy Is the Ability To Do Work. There are many forms of energy, but they can all be put into two categories: potential and kinetic. Modern civilization is possible because man has learned how to change energy from one form to another and use it to do work.