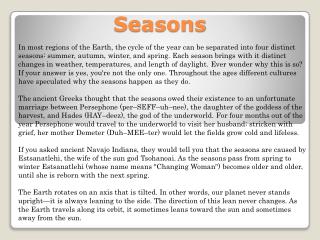 Seasons. In most regions of the Earth, the cycle of the year can be separated into four distinct seasons: summer, autumn, winter, and spring. Each season brings with it distinct changes in weather, temperatures, and length of daylight. Ever wonder why this is so? Seasons - Four a. there are seasons each year. b. they are: winter summer autumn spring seasons of the year winter

SEASONS - . four seasons make a year !. miss . brackett. today we will learn…. what is a season? what are the four

Seasons - . what do you know about seasons?. the big idea. students will understand how earth’s tilt on its axis

Seasons - . ch 22.2 solar energy and the atmosphere page 555. why do we have them?. the orbit of the earth. closest point

Seasons - . what do you know about seasons?. seasons. a season is one of the major divisions of the year, generally based

Seasons - . what do your students think causes the seasons?. images at http://nix.ksc.nasa.gov/info. created by the lunar

SEASONS - . v. cruz. the earth’s axis is tilted 23.5 0 from vertical. the axis always points in the same direction in

Seasons - . earth’s revolution:. revolution is the yearly orbit around the sun. earth is a satellite of the sun. our

Seasons - Spring. summer. seasons. there are four seasons in a year. they are spring, summer, autumn and winter. autumn.

Seasons - . brendi. deleon. seasons. the seasons are caused by the tilt of earth. the earth is titled 23.5°. the tilt

Seasons - . of the year. by salena weed. table of contents. what are seasons? spring summer fall winter seasonal weather