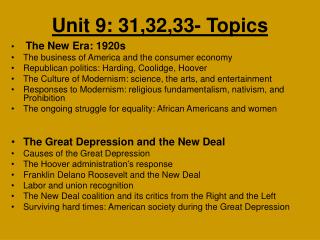 Unit 9: 31,32,33- Topics. The New Era: 1920s The business of America and the consumer economy Republican politics: Harding, Coolidge, Hoover The Culture of Modernism: science, the arts, and entertainment Responses to Modernism: religious fundamentalism, nativism, and Prohibition

Alma 31-32 - . faith in jesus christ. words that rock your world . things that make you go arrgghh! the tribe has spoken

~! PPT.#9!~ - . by:cassidy barnette . franchise. an authorization granted by a government or company to an

Unit 9 Chapter 32 Mammals - What is a mammal?. hair, providing insulation,

CHAPTERS 32, 33, 34 - . business in a nutshell. “no one form of organization is right for every business. the proper