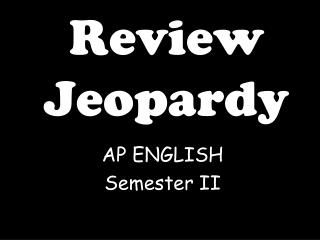 Review Jeopardy. AP ENGLISH Semester II. JEOPARDY!. Click Once to Begin. Fabulous prizes may be at stake. Rules…. I am the decider of all things. No crybabies allowed. A brief narrative of an entertaining and presumably true incident. What is an ANECDOTE?. Jeopardy Review - . what is a number that only has one multiplication combination called? click here for the answer.

Review Jeopardy - . an economic system that focuses on giving individuals in that society the ability to make their own

Review Jeopardy - . 3 possible answers. these types of investments have guaranteed rates of return. what are bonds money

Review Jeopardy - . members of the church, including the pope, bishops, and priests. answer. clergy. the major religion

Jeopardy Review - Analytic geometry. jeopardy review. rules. every team will answer all questions. for your team to win

Review-Jeopardy - . teacher instructions: this game is designed to help you review the curriculum with your students

Review Jeopardy - . 3 possible answers. these are the three types of degrees that require a bachelor’s degree as a

Review Jeopardy - . final jeopardy. $100 question geography. the united states is located between which two bodies of

Review Jeopardy - . ap english semester i. jeopardy!. click once to begin. a game show template. a figure of speech that