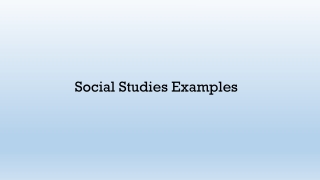 Case Studies and Examples - Paconius and the pedestal for apollo. the ten books on architecture written by roman

SOCIAL STUDIES - . week four fifth grade. what were four new technologies that most greatly affected the daily lives of

Social Studies - . essential unit question: how did the ancient world contribute to the development of civilization? .

Social Studies - . essential unit question: how did the ancient world contribute to the development of civilization?.

SOCIAL STUDIES - . what we teach, why we teach it. why history

SOCIAL STUDIES - . third grade week three. what was the name of the african american language made up of several african

Social Studies - . by: jaedyn finkbeiner. gilgamesh was the en of sumer. had the first way of writing that was called

Social Studies - . mr. tulk. housekeeping. one person needs to complete test. a bunch of you need to complete

Social Studies - . from sea to sea adding provinces and territories. heading west. john. a. macdonald and the fathers of

Social Studies - Why?. studies, records and analyzes what is happening. social studies. the beginning, changes and

Social STUdies - . harnett county schools * grades 9-12. why do we want students to begin seeing things through a