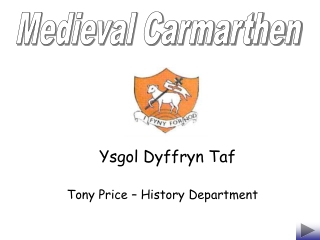 Medieval Carmarthen. Ysgol Dyffryn Taf. Tony Price – History Department. Although not medieval, John Speed’s map of 1610 gives us a fair idea of how Medieval Carmarthen would have looked as the layout of the town had changed little between Medieval and Stuart times. The Middle Ages. THE POLITICS OF THE BUDGET IN GHANA (as seen in 2004) Tony Killick - . presentation to cabri seminar, addis ababa,

Welcome to the History Department! - . the history department. what can the study of a level history offer students?.

The Sopranos - . tony bendeck asfura. a moral never land identifying with tony soprano. tony soprano is a vicious and