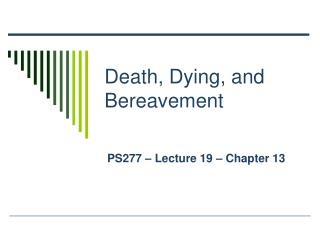 Death, Dying, and Bereavement. PS277 – Lecture 19 – Chapter 13. Literary Commentary on the Great Mystery: Shakespeare vs. Dylan Thomas. Julius Caesar : “Of all the wonders that I have yet heard, It seems to me most strange that men should fear; Seeing that death, a necessary end,

The death of email has been greatly exaggerated - Email marketing. is it on its deathbed; an ancient channel that has no

Unit8 - . cultural information. audiovisual supplement. watch the video and answer the following questions. 1. what is

The Death of Nisus and Euryalus . Aeneid IX. 590+ - Then, pierced, he cast himself upon his lifeless friend; there, at

Why &amp; How to Investigate Death and Dying - . lessons of 30 years. reflecting on the significance of endings.

Death and Dying - . by: keith and james. why is there death?. all living things eventually die. living cells break down

Death Investigations - . chapter 7. introduction. a basic requirement in a homicide investigation is to establish whether

Death and Dying - . death. “the final stage of growth” experienced by everyone and cannot be avoided young- ignore