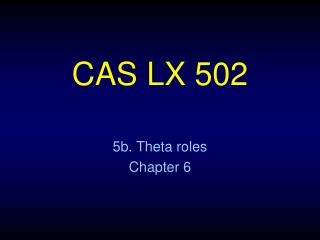 CAS LX 502. 5b. Theta roles Chapter 6. Roles in an event. Pat pushed the cart into the corner with a stick. This sentence describes an event, tying together several participants: The event is a pushing event Pat is the instigator of the event The cart is affected (moved) during the event CAS LX 502 - . 5a. modality 5.3-. propositional attitudes. there are various ways that we can embed a proposition into

CAS LX 502 - . 1a. introduction. your dog ate my homework. what does this sentence mean? is it true? what is the current

CAS LX 502 - . 13b. questions. seeking truth. much of what we’ve done this semester has to do with characterizing (our

CAS LX 502 - . 6b. context and inference 7.4-. context and meaning. nearly everything one reads or hears requires

CAS LX 502 - . 9a. formal semantics functions and lambda notation. semantic type. the entire semantics that we are

CAS LX 502 - . 8b. formal semantics a fragment of english. infinite use, finite means. a fundamental property of language

CAS LX 502 - . 14a. discourse representation theory 10.9. meaning in discourse. the formal stuff we have concerned

CAS LX 502 - . 11b. summarizing the fragment analysis, relative clauses. (f3). once more from the top. our semantic

CAS LX 502 - . 11a. predicate modification and adjectives. is hungry. as a starting point, we’ve been considering is

CAS LX 502 Semantics - . 3a. lexical decomposition. splitting the word. what we will explore today is the idea that words

CAS LX 502 Semantics - . 1b. the truth ch. 1. specifics of meaning. basic goals initially: what kind of thing is the