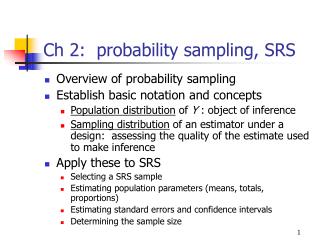 Chapter 17 Audit Sampling for Tests of Details of Balances - . presentation outline. the 14 steps of audit sampling for

Electrofishing Efficiency and Sampling Design 6 - . session purpose. the primary purpose of this module is  to help

Cluster sampling - . defn: a cluster is a group of observation units (or “elements”). cluster sample. defn: a

Probability for linguists - . john goldsmith. what is probability theory?. it is the quantitative theory of evidence .