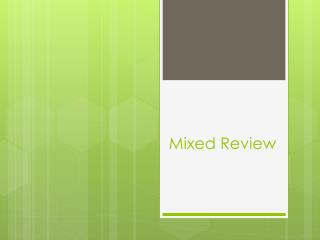 Mixed Review. Extra Credit Points:. AD Geometry - For every question correct on the DA you will receive one major grade extra credit point! Five Question Mixed Review - . 1. what is this function: y= 3x-2 2. what is the y-intercept of the above equation?

Measurement Focus with Mixed Review Use with CPS - . which is the closest length of the chain pictured above. use your