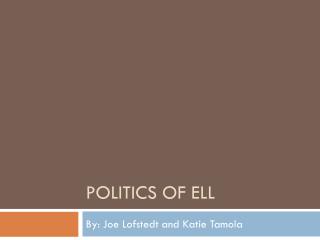 ELL and RTI - . we must think carefully!. partnerships. pick someone near year you to be your partner. the person with

FNSBSD ELL Program - . https://www.k12northstar.org/domain/1095. who are our ells?. students who: speak a language(s)

POLITICS OF SLAVERY - . compromise of 1850 due to the gold rush,california population had grown enough to apply for