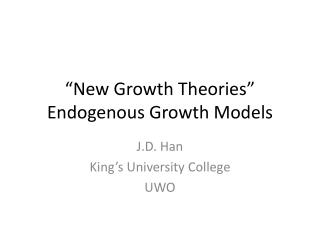 Developmental Theories Growth and Development - Why study theory?. provides a frameworkoffers logic for observations and

Endogenous Growth - . endogenous growth. beginning with the 1970’s, us and other developed economies went through a 20

Growth Curve Models - . thanks due to betsy mccoach david a. kenny august 26, 2011. overview. introduction estimation of

Growth Theories - . three main strands of growth theory have developed over time, each building upon and replacing the

Income Disparity among Countries and Endogenous Growth - 2008 spring. econ 305 e. 2. convergence in the solow model. we