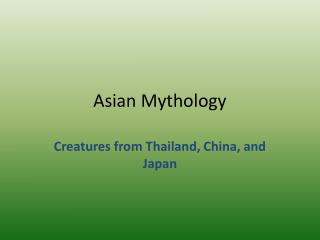 Mythology - . a traditional story that was created to explain mysteries of the universe. characteristics: myths explain

Mythology - . introduction to mythology and homer. terms and definitions. myth -a person or thing having only an

Mythology - . the gods background info. ancient greek society. good stories last 1000s of years, this is why we have

Mythology - . a brief look into the world of. what is a myth?. a myth may be broadly defined as a narrative (a story),

Mythology - . by: alysha staton age:13 patrick county high school. zeus(jupiter). zeus is the supreme king of the gods he

Mythology - . mythology refers to the study of myths. old traditional stories that concern fantastic or supernatural

Mythology - The 12 olympians. mythology. zeus. roman name: jupiter god of: the sky son of: cronus and rhea husband of:

Mythology - . by steven and cody . chaos . she was a void of nothingness gave birth to gaia, tartarus and eros. then

Mythology - . general notes. definitions. story: an account of incidents or events. there are five kinds of stories.

Mythology - . rachel monsees. the hydra. the hydra was a serpent with multiple heads that would guard a gate to tartarus

Mythology - . by steven and cody . chaos . creates universe a void of nothingness gave birth to the gods who formed the