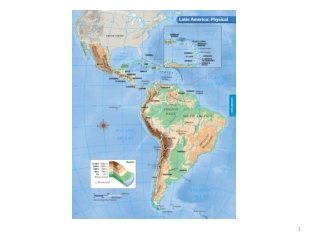 Wordpress.com. Worldatlas.com. Chapter 9. Physical Geography of Latin America: From the Andes to the Amazon From rain forests and mountain ranges, to deserts and savannas, Latin America is rich with varied beauty, resources, and plant and animal life. Section 1: Landforms and Resources.