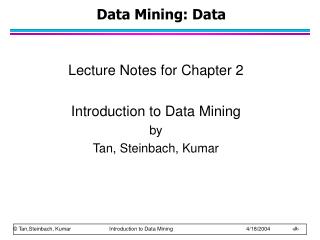 Data Mining: Data. Lecture Notes for Chapter 2 Introduction to Data Mining by Tan, Steinbach, Kumar. What is Data?. Collection of data objects and their attributes An attribute is a property or characteristic of an object Examples: eye color of a person, temperature, etc. Advantages of Data mining in Data science - In this article, we will learn the profits of the data. as was in our

CSC 550 Describe the stages of the data mining process/TUTORIALOUTLET DOT COM - General instructions: this part of the