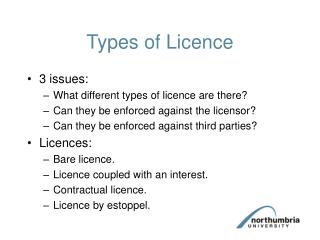 Types of Licence - . 3 issues: what different types of licence are there? can they be enforced against the licensor?

Forklift Licence - After completing this course you get a licence to operate any forklift, including counterbalance,

Licence Fees - . 23 august 1851: 30 shillings per month, payable in advance. same fee for all, successful digger or not.