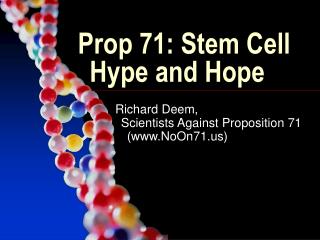 Prop 71: Stem Cell Hype and Hope. Richard Deem, Scientists Against Proposition 71 (www.NoOn71.us). Stem Cell – Definition. A cell that has the ability to continuously divide and differentiate (develop) into various other kind(s) of cells/tissues. Kinds of Stem Cells. Pluripotent. Stem Cell Therapy - A treatments for a wide range of diseases and injuries, many of which cannot be treated with

Stem cell research - . stem cells. stem cells are immature cells that have not turned into specific cells yet; they

STEM CELL RESEARCH - . pros and cons. what are stem

Stem Cells: Hype and Promise - . what they are, how they are used and can they ever provide clinical benefits?. today’s

Between the Hype and the Hope - . democratizing icts for development: public access and beyond. foundation for media

Stem Cell Research - . ruth phillips current events period 5. what are stem cells?. cells can develop into any cell they