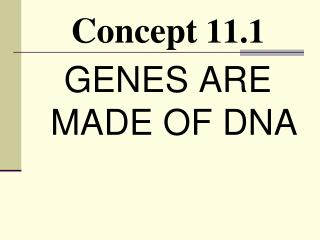 Concept 11.1. GENES ARE MADE OF DNA. How did biologists discover that DNA was the genetic material?. Understanding structure and function of DNA may be the most significant biological discovery of the 20 th century How did this discovery occur? Concept of Shadow Network - Concept of ubiquitous network. network that is flexible and adaptive. check this article -

Think about… 18.1 The concept of homeostasis 18.2 Regulation of blood glucose level - Recall ‘think about…’

The concept of pH and pKa - . lecture 3 handout . introduction . why is ph so important for maintaining homeostasis? ph

The Internship Concept of the MA SES - . how to combine theory with practice?. dr. denis gruber. day 1. outline of

THE CONCEPT OF HRM - . hrm defined. human resource management (hrm) is a strategic, integrated and coherent approach to

Chapter 13 - . `. chapter 13 performance measurement. after studying chapter 13, you should be able to: understand the