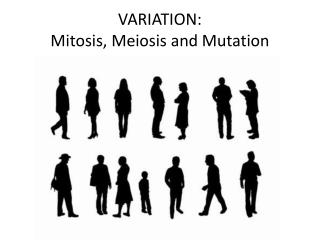 VARIATION: Mitosis, Meiosis and Mutation. Mitosis: Asexual reproduction Cloning. Populations require variation If all individuals in a population were exactly the same : Life would be uninteresting

Do Now - . humans have 46 chromosomes (or 23 pairs of chromosomes). we just learned how mitosis works. how many

Meiosis, Recombination and Mapping - . meiosis why bother to map your gene? mapping a mutant defining a single gene

MUTATION NOMENCLATURE - . summarise the current recommendations for mutation nomenclature at the dna and protein level.

Human Reproduction - . difference between meiosis and mitosis. meiosis i. interphase. prophase i. metaphase i. anaphase

How Do Bacteria Reproduce? - . not mitosis not meiosis no spindle fibers formed prokaryotes reproduce by binary fission.