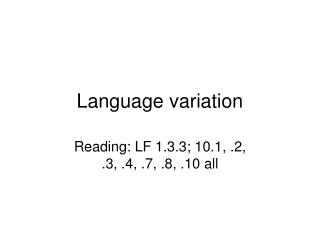 JavaScript - . javascript introduction. javascript is the world's most popular programming language. it is the language

Lecture #2 – Evolution of Populations - . image of a population of penguins. key concepts:. the modern synthesis

SEXIST LANGUAGE - . what do we mean by sexist language. definition. any language that discriminates against either sex is

Language and Dialect - . language vs. dialect. “a language is a dialect with an army and a navy.” usually

Formal and Informal Styles - Special features like these in language are a matter of style. . the word style has several

Chapter 16 - . genes and variation. 16.1 - variation of traits in a population (gene pool). population: all the members