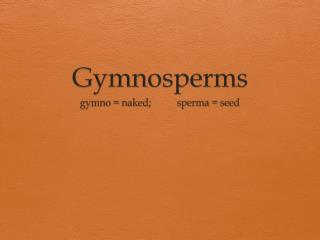 Gymnosperms. g ymno = naked; sperma = seed. Where are we in taxonomy and geological time?. Lifecycle Evolution. *** Significant advancements over seedless vascular plants *** The seed contains an embryonic sporophyte Protected and surrounded by nutrients for quick germination Gymnosperms - . spruces, pines, etc. review from friday. what are the characteristics of kingdom plantae? what is true

Gymnosperms - . by ala maher and danah alaa. gymnosperms-what are they?. gymnosperms are land plants that produce seeds