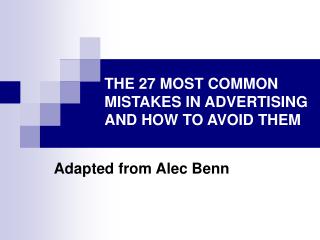 THE 27 MOST COMMON MISTAKES IN ADVERTISING AND HOW TO AVOID THEM. Adapted from Alec Benn. Mistake # 1. Putting in charge of advertising a person whose responsibilities do not coincide with the purpose of the advertising. Persuasion Techniques - . propaganda and advertising. what is propaganda?. a means of convincing people: to buy a certain

How do you avoid being boring? - . developing your ideas for informative speeches. advice # 1: a good start. al gore

Advanced UNIX - . the c shell. objectives of these slides: introduce the c shell concentrate on features not in the