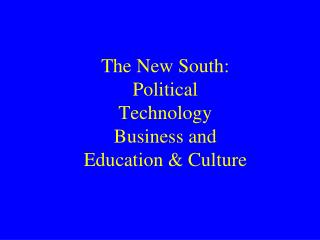 The New South: Political Technology Business and Education & Culture. Political Redemption. After the Civil War ended what would the “New South” be like? “New South” phrase used to describe southern progress in late 1800s. Used 1874 by Atlanta newspaper The Cultural Environments Facing Business - . 2-1. cultural literacy detailed knowledge of a culture that enables a

International Business Lecture 5: The political and legal environment - . aims of the lecture. to learn how differing

Education and Technology: K -12 - . issues in canadian public education in the ‘information age’. why study education