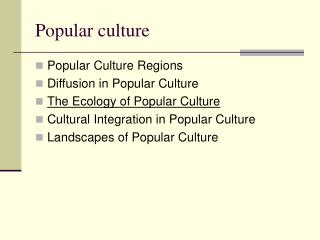 Popular Culture - . popular culture. what is pop culture? what does pop culture tell us? read more to find out…..

POPULAR CULTURE - . popular culture is “a system of shared meanings, attitudes, and values and the symbolic forms in

Popular Culture - . is the arts, artifacts, entertainment, fads, beliefs and values that are shared by large segments of