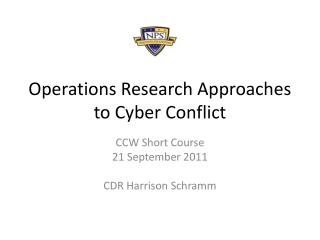 Operations Research Approaches to Cyber Conflict. CCW Short Course 21 September 2011 CDR Harrison Schramm. Lecture Goal. To provide an executive overview of Operations Research… …And the application of these techniques to problems in the cyber domain. Introduction .

Chapter 11: Real World Case 3 Cyber Scams: Four Top Cyber Criminals – Who They Are and What They - . jeremy umeno