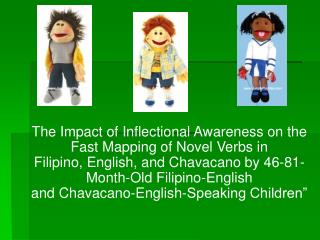 The Impact of Inflectional Awareness on the Fast Mapping of Novel Verbs in Filipino, English, and Chavacano by 46-81-Month-Old Filipino-English and Chavacano -English-Speaking Children”. Topic for Parallel Session: No. 8: “No Vocabulary? The Intellectualization Issue on Philippine Languages”