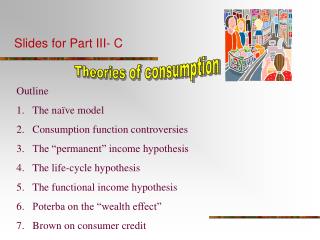 Slides for Part III-B - . these slides will take you through the basics of income-expenditure analysis. the following is

Introduction to C++ Part III - . file i/o in c++. stream objects. cin – the standard input stream - an object of the

Slides for Part I - . national income accounting (nia). nia is the measurement of aggregate or total economic activity.

Slides for Part IV-A - . introduction to forecasting. outline: what is forecasting? why use forecasting techniques?