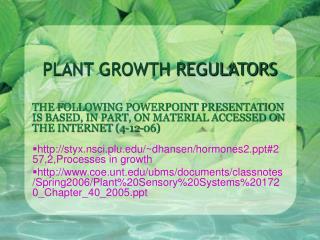 PLANT GROWTH REGULATORS. THE FOLLOWING POWERPOINT PRESENTATION IS BASED, IN PART, ON MATERIAL ACCESSED ON THE INTERNET (4-12-06) http://styx.nsci.plu.edu/~dhansen/hormones2.ppt#257,2,Processes in growth Understanding Plant Growth Regulators - . interest approach. let’s talk for a moment about yourself. what are some