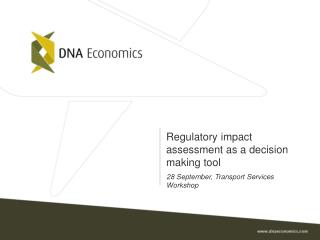 Regulatory impact assessment as a decision making tool. 28 September, Transport Services Workshop. Introduction. Good policy takes into account the facts on the ground, and the evidence on the likely impact of interventions ENVIRONMENTAL IMPACT ASSESSMENT: A TOOL FOR DECISION MAKING - . what is eia?. a process attempts to identify and

Regulatory Impact Assessment - . and the execution of 1972/2003/ec. what is it all about?. primary goal: to protect the

Decision making as a model - . a. more models and measures b. costs and benefits c. the optimal criterion (bayes is

Decision making as a model - . 4. signal detection: models and measures. nice theorems, but how to proceed in practice?.

Musculoskeletal Decision Making Tool - . this tool is currently in development and work is underway to refine and enhance

Assessment for Rehabilitation: Pathway and Decision-Making Tool - . susan hillier on behalf of the asc rehabilitation

Integration of Regulatory Impact Assessment into the decision making process in the Czech Republic - . aleš pecka

Integration of Regulatory Impact Assessment into the decision making process in the Czech Republic - . aleš pecka