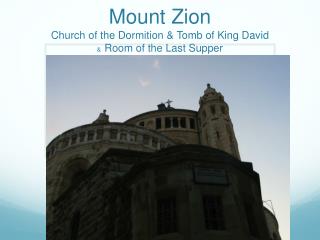 The Tomb of Jesus? - . robert c. newman. the tomb of jesus?. on 4 march 2007, the discovery channel broadcast their

King Tut-Ankh-Amun - . by bowdre fortson. a.k.a king tut. pharaoh who accomplished little in his life most recognized and

David the King - . the real heart of servanthood is security. show me someone who thinks he is too important to serve,

King Tut’s Tomb - . the mystery of a king’s curse. by tyler. history of king tut. king tutankhamen (tut) was an

Find King Tut’s Tomb! - . play this text adventure by traveling through egypt on a archaeological quest to find king

Observing the Lord s Supper - The lord's supper is a ritual, in that it is a sequence of events that the lord gave

The Empty Tomb Matthew 28:1-11 - . the facts the guarded tomb was empty jesus appears after his resurrection mary

Last Supper - . now we must take a look at the paschal mystery on a much closer levelthe first step/ event in this