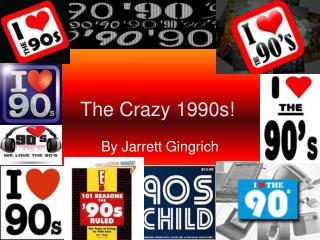 The Crazy 1990s!. By Jarrett Gingrich. 1990. In 1991 the Hubble Space Telescope was launched The telescope has published more than 6,000 scientific articles! Every 97 minutes the telescope makes a trip around the earth. UMW Softball - . coaches getting the field ready. competition. scouting the. hangin' out. at the airport. ready for

1801 - . election of 1800. huzzah for being the president!. midnight appointments. i can see it now…those crazy

Looking for the appropriate size: genetics under control - . crazy about biomedicine – may 2013 ana ferreira