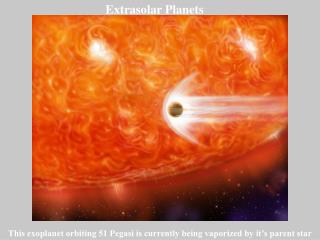 Extrasolar Planets. This exoplanet orbiting 51 Pegasi is currently being vaporized by it’s parent star. Exoplanet Exploration: A new field in Astronomy. For centuries Astronomers have asked two fundamental questions. 1. Do other worlds exist? 2. Is there life on those other worlds? Out of This World Learning! Activities, Apps & Resources for Aliens & Planets - Find resources and bookmarks at

Sponge #1 8-13-12 - . if scientists search other planets for possible life, they are likely to focus on the presence of

Planet Earth Part Two : Our Solar System - . let’s review! (section 1). 1.) how many planets are there in our solar

The Jovian Planet Systems - . totally different planets than our familiar next door neighbors! the formed beyond the

Constructing Knowledge, or, How a Bill Becomes a Law - . tc chapter 5:. beleving and knowing . the distinction can be

“HUMANS ARE DIFFERENT” Alan Bloch - . a presentation made by: llano, debbie b. iv - boyle. ] there is an

Astrologers with an old paltry cant and a few pothooks for planets to amuse the vulgar, have too long been suff - Ered to

The average distance from Earth to the sun is - . 1 ly 1 million km 1 million mi. 1 billion km 1 au. a typical galaxy

Solar System 2010 - . presented by linder winter. event description. this event will address: the sun planets and their