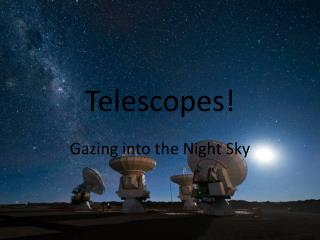 Telescopes!. Gazing into the Night Sky. What would Galileo do if he could see things we can see through a telescope?. There are many inhospitable places on Earth…but nothing like it is in Space! Objectives - Chapter 26. section 1 viewing the universe. objectives. describe characteristics of the universe in terms of

Light and Telescopes - . i. radiation: information from space a. light as a wave and a particle b. the electromagnetic