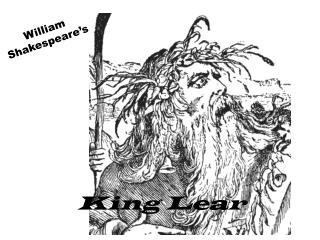 William Shakespeare’s. King Lear. Introduction. King Lear is known as “Shakespeare’s most unforgiving tragedy”. The play reduces human beings to their most vulnerable and “elemental state” to investigate the depths of human nature. King Lear - . lear as a tragic hero. generally a respectable ‘good’ man. lear is the king he has the respect of

King Lear - . d.k. lee. giving away land starts conflict. king lear, in britain retires and decides to give up the land

King Lear - . third lecture . the gloucester subplot. the division between the generations clearly parallel to the lear

King lear - By : william shakespeare. king lear. king lear was based on an aged monarch who was abused by his children.

King Lear - . tragic-comedy. shakespeare considers it a tragedy for the reasons that the main character leads to his own

King Lear - . second lecture. the fool. one of the most wonderful conceptions, and wonderful roles, in the play. he’s a

King Lear - . act iv notes. act iv, scene 1. heath—edgar says he is ready to reveal himself but he sees his blind

King Lear - . sight and blindness. ‘see better, lear’. the importance of seeing yourself and the world clearly is

King Lear - . parallels. parallelism in literature. what is it?. why have it?. what parallels have we seen in kl ?. kl

King Lear - . justice and fate . definition of justice . the quality of being just; righteousness, equitableness, or