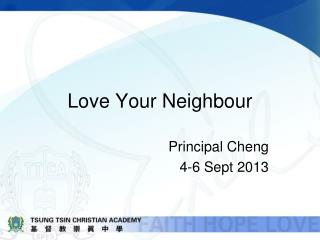 Love Your Neighbour. Principal Cheng 4-6 Sept 2013. What is LOVE?. A profoundly tender, passionate affection, a feeling of warm personal attachment for another person such as parent, child, or friend. What is LOVE?. Faith, Hope, Love are the essences of Christian belief. Hatred Dislike LOVE YOUR NEIGHBOUR AS YOURSELF - . before we love our neighbour, we must learn how to love ourselves . . from the love

&quot;As you love yourself, you will love your neighbour&quot; - . transformation happens. you initiate in love.

This is the week we love every neighbour - . learning objective to know what prayer is. what is prayer? why do we

Neighbour Joining - . by sivan yogev. neighbour joining. algorithm presented by saitou and nei in 1987 an

Good Neighbour? - . types of externality. private costs costs to the company of their actions. what do you think is the

My Neighbour - . by jolene tio 5 2 love. this is my neighbourhood.i live in bedok reservoir road. there are cinema

My Neighbour - . by: claudine, 5 2respect. hi, i am claudine. i live in jalan tenaga. i have lived there since i was one.

Your Love - . tommy walker. where can i go where can i flee to run from your presence. if i go up to the heavens or

Your Love - (1). your love. father god, i come to you just as i am to seek your face. take my hand and hold me