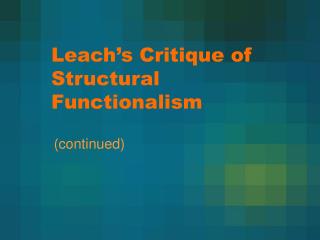 Leach’s Critique of Structural Functionalism. (continued). Contradictions in the Ideal Systems. 2. The Critique of Social Change Kachin Hill area characterized not by equilibrium, but by an ‘unstable equilibirum’ in continual oscillation: Functionalism - . functionalism. reigned as the dominant theoretical perspective. often referred to as structural

CRITIQUE OF FUNCTIONALISM - . what is the functionalist view of human nature? what is the relationship between the

Structural Equation Modeling (SEM) Essentials - . purpose of this module is to provide a very brief presentation of the