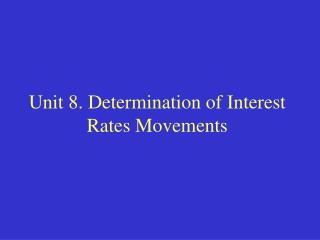 Unit 8. Determination of Interest Rates Movements. The loanable funds theory, is commonly used to explain interest rate movements, suggests that the market interest rate is determined by the factors that control the supply of and demand for loanable funds. LOCOMOTOR MOVEMENTS - . an informative power point for physical education teachers (future p.e. teachers) to use as an