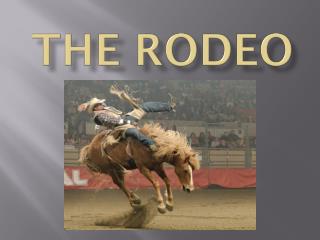 The Rodeo. Background. Rodeo comes from the Spanish word " rodear " which means “to encircle or to surround.” To the Spanish in New Spain(now Mexico) in the mid-16th century, a rodeo was simply a cattle roundup. Rodeo Word Problems - . the rodeo arena has eight corrals. there are nine horses in each corral. how many horses were

The New Mexico Rodeo Association 2010! - . the nmra is seeking sponsorships for the 2010 rodeo season. the nmra has a

Rodeo Art 2010-2011 - . the assignment. you will complete a realistic drawing based on a photo. this photo must taken by