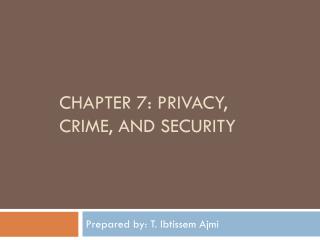 Chapter 7: Privacy, Crime, and Security. Prepared by: T. Ibtissem Ajmi. Privacy in Cyberspace. Privacy: an individual’s ability to restrict or eliminate the collection, use and sale of confidential personal information The problem: collection of information without consent The Social Security Number Crisis - . latanya sweeney. privacy.cs.cmu.edu. questions addressed in this lecture. how are

Chapter 5 Psychology and Crime - . chapter objectives (1 of 3). understand the difference between psychiatric and