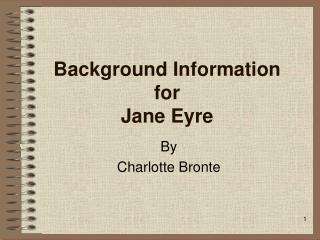 Background Information for Jane Eyre. By Charlotte Bronte. THE NOVEL. Published in October 1847 During the Industrial Revolution. Schooling. During the early 19 th century, it became fashionable to educate females. However, free education was not yet available for either sex. Background Information for Jane Eyre - . by charlotte bronte. the novel. published in october 1847 during the

Background Information for Jane Eyre - . by charlotte bronte. the novel. published in october 1847 during the industrial

Jane Eyre - . the gothic. the gothic is a major theme and story structure in jane eyre and most literature at the time.

Jane Eyre - . daisy cooper nia smallwood. question 19. place jane in this century. would she be a feminist? create a

Jane eyre - . suggestions for research. the supernatural. the red room jane - a witch, a faerie? has visions/dreams the

Jane Eyre - . the theme of marriage. bildungsroman. a novel which charts the progress and journey from childhood into

Jane Eyre - Girls, do you know charlotte's been writing a book, and it is much better than likely" patrick bront,

Jane Eyre - . niki turner marcos chavez 3 rd period. the prompt. the subject of nature and behavior – identify for each