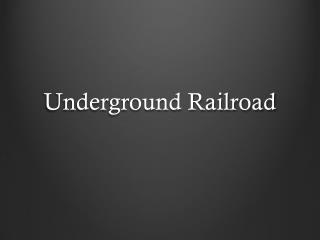 Mining - . and its environmental impact. outline. 1. types of mining (and why we use them) 2. beneficiation 3. smelting

IAEI EASTERN SECTION - . review of code breakfast questions brought to you by fellow members who attended the section

THE UNDERGROUND-RAILROAD - . your jorney begins now. click to see what lies ahead. menu buttons. press the to go forward.

THE AGE OF IMPERIALISM - . essential question : what is imperialism and what factors led to the rise of imperialism?. the

Railroads Led the Way - . improving the railroads. each r/r built it’s own tracks to its own specs no unified code

Plessy v. Ferguson - . 1896. explain how the supreme court justified the practice of segregating railroad passengers in

Railcar 101 The Basics of Railcars: Car Types, Components and Rules - . how the railroad works carol scarborough.