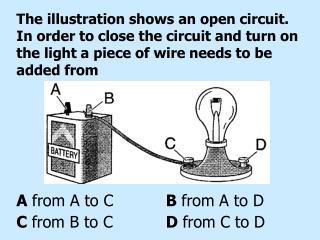 The illustration shows an open circuit. In order to close the circuit and turn on the light a piece of wire needs to be added from. A from A to C. B from A to D. C from B to C. D from C to D. B from A to D. What is the operating principal of a series circuit?. C from A to Z - . robert rinker and richard wall university of idaho. characteristics of c. structured and very modular

From A B C … …to a University Degree - . offshore investor. educational schemes. provide your children

Cataloging from A (authorities) to C (Connexion) - . authority control in millennium presented by: lynn whittenberger

From C to Shining C : - . a cornucopia of classroom concepts. in an ideal situation, what do i want my students to

From a MENTION to a HEADLINE - . facilities. books. audio books. internet. newspaper &amp; magazines. photocopy. what

From a Bill to a Law - . 9.1.4 examine the structure of canada’s federal political system by exploring and reflecting

A is for Apple B is for Ball C is for Cat D is for Dog - . e is for elephant f is for fish g is for gorilla h is for hat.

A. positive. B. negative. C. zero. D. not enough information given to decide - A tractor driving at a constant speed