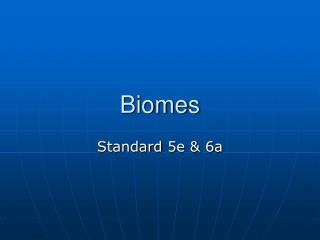 World Biomes - . objective: students will be able to analyze abiotic and biotic factors in order to identify the

Biomes - . biomes. biosphere- anywhere life is supported this spans from several miles above the earth’s surface to

Biomes - . what is a biome?. biome = region characterized by distinct plant and animal populations along with similar

BIOMES OF THE EARTH - . biomes of the earth. what is a biome? a collection of ecosystems with similar biotic and abiotic

Aquatic Biomes - . terrestrial vs. aquatic biomes. terrestrial biomes are ones located on land in your group list the 6

Biomes - . a review. what is a biome?. biomes are a geographical area of distinctive plant and animal groups adapted to

Biomes - . chapter 6. biomes. list anything and everything you know about biomes. chapter 6 section 1 objectives. 1.

Chapter 10 RAD Guide - . november 29, 2010. what is the difference in how aquatic biomes are grouped vs. terrestrial

Biomes - . think back to ecosystems…. individual- 1 specific organism. population- all of 1 type of living organisms.

Biomes - . major varieties of world ecosystems. g.2.9 distinguish between biome and biosphere . a biosphere is the entire

Biomes of the World - . what is a biome?. a biome is the largest geographic biotic unit, a major community of plants and

Biomes of the World - . what is a biome?. a biome is the largest geographic biotic unit, a major community of plants and