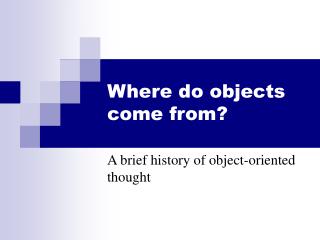 Chapter 2 Using Objects - . chapter goals. to learn about variables to understand the concepts of classes and objects to

A First Look at Objects - . contents . how to use this lecture primitive types in java some terminology classes and

Classes and Objects - . const (constant) objects and const member functions. principle of least privilege only give

OpenEdge RDBMS Transparent Data Encryption - . i left the new sports database on a barstool and lost it. no worries. marv

Introduction to Objects - . abstraction:the object-oriented approach. everything is an object. a program is a bunch of

Permutations When all the objects are not distinct objects - . theorem 1: the number of permutations of n objects, where

Objects and Properties - . objects : physical &quot;things&quot; in our environment properties of objects those

Objects and activity - . ”when confronted with something new, people will employ whatever experience they may have in

Persistent Objects - . persistent objects are objects that continue to exist after the application program terminates

S EED – What it does - . s eed transfers data from n-tuples to objects provides framework to read n-tuple (also chained

Chapter 9: A Second Look at Classes and Objects - . starting out with java: from control structures through objects