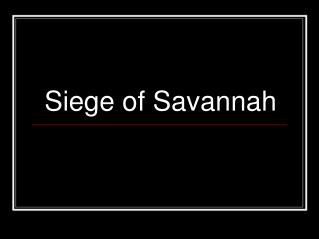 Siege of Savannah. At this point of the war, the British controlled Savannah. James Wright, the popular and final royal governor returned to control the colony for the British Crown. I am sooooo popular! No one will attack my city-everybody loves me!. Siege of Savannah In December 1778, British forces attacked and took control of Savannah. - Ss8h3 the student will

Siege of Savannah In December 1778, British forces attacked and took control of Savannah. - Ss8h3 the student will

Siege Of Tsingtao - . by: zach

Siege of Vicksburg - . summary-the battle was the turning point of the civil war. it divided the south and the north had

Siege Of Vicksburg - . shawn morse. grant and his forces invested the city and entrapping a confederate army under lt.

The Siege of Boston - . page 177. 1. after the british made it back to boston from lexington, how many militiamen from

The Siege Of Vicksberg - By lane smith. the siege of vicksberg. the siege lasted from may 18 th to july 4 th it was a

The Siege of Constantinople - . the turning point between east and west the defining moment of the ottoman empire the end

The Siege of Alesia - . abraham bluestone. plot summary. after narrowly losing to caesar in battle,vercingetorix retreats

The Siege of 1683 - . the ottomans vs. t he habsburgs. goals: why did the ottomans provoke this war? why were the