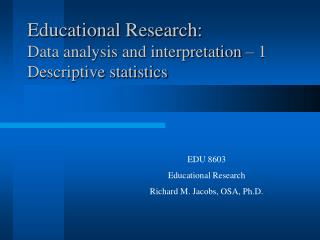 DESCRIPTIVE RESEARCH - . to behold is to look beyond the fact; to observe, to go beyond the observation look at the world

Qualitative Data Analysis - . quantitative research . involves information or data in the form of numbers allows us to

Biostatistics - . many issues in the health, medical and biological sciences are addressed by collecting and exploring