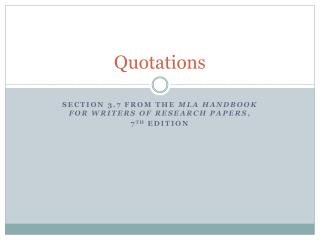 Quotations. Section 3.7 from the MLA Handbook for Writers of Research Papers , 7 th Edition. 3.7.1 Use and Accuracy of Quotation. Direct quotations are a dynamic device that can used to emphasize a salient point from a given text. Heroes – Robert Cormier - . key quotations. chapter 1 – page 1. “my name is francis joseph cassavant and i have

Understanding Media - . key quotations from mcluhan. the medium is the

Understanding Media - . key quotations from mcluhan. the medium is the

About a boy - . our topic: will freeman: his way of life and his attitudes towards people. who where when what character

Writing with Quotations - . learning objectives. recognize and use different types of quotations choose and place

Integrating quotations - . tips on how to integrate textual support smoothly into your own writing.