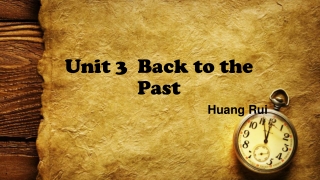 Unit 3 Back to the Past. Huang Rui. Welcome to the Unit. Achievements of ancient civilizations from home and abroad. Thinking. According to the pictures, can you think out some features of civilization?. Agriculture. Social stratification. Manufacture. Monumental architecture. Writing. Unit 3 Back to the past - . ?. china has a total of 38 cultural and natural heritage sites on the unesco world heritage

Back to the Past - . music is organized sound ( one definition anyway ) but what the heck is sound??. sound ---.

Today: Unit 6: Travel/ PAST PAST - . make the story: put the cards in the correct order. a few years ago manchester

BACK TO THE FUTURE: UNDERSTANDING PAST EXPOSURES TO INFORM FUTURE PRACTICE - . john wierzbowski, msc, mph 1 , frances

Unit 2 English in the Past - . to identify the place of english among other related languages. to identify standard

Back to the past: with a smile or a grimace - . post-modern russian culture. komar and melamid: sotsart. vitaly komar

Unit 3 Teenage problems Welcome to the unit - . a survey about students’ problems. don't get enough sleep don't get

Unit 27 The past and the future - . the objectives of the unit. learn how to talk about habits and routines in the past.

Unit 2 Back to the Basics &amp; Orthopedics - . instructor: lisa kay lashley, mba. back to basics. this seminar is to

Unit 11 Past Events - . a movie a play a concert a party a game a speech. past-expressions. yesterday was saturday. today